‘Do you remember when we walked arm in arm around the narrow cobbled streets? The sun high and hot that summer afternoon? That day belonged to us and us alone. Do you remember the small shops we visited and the lunch we shared. That day will stay with me forever. ''I think we could be happy here'' you said…not realising that we already were. In Rye.’

This week at Ryantown HQ we have been working on more new ceramics. We decided to adapt Rob's drawing 'In Rye', which exists as a screen print and on a t-towel too, to produce a brand new mug.

Earlier in the month, Libby posted a photo on our facebook page of the two colours we had sampled. We couldn't decide which we preferred, so we asked Rob's facebook and twitter followers for help in choosing which colour to produce. After an overwhelming response for both colours we decided to produce the mug in both bright blue and teal!

You can see below some of the stages involved in making the mugs which are then fired in our kiln.

The mug features a specially designed base, like Rob's latest series of ceramic plates, and reads:

'Rye Mug July 2013. Asked by his Teacher in History Class when did the Dark Ages in England end? He answered with mock surprise ''I never realised they had finished!'' Printed and fired at The Mangle studio London E2. R Ryan.’

Here they are basking in the glorious sunshine in our yard! 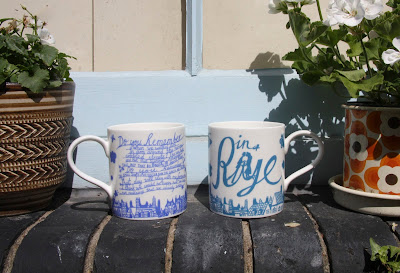 Louise Renforth
Studio Assistant
Posted by Rob Ryan at 1:13 AM

i absolutely luv your mug designs. I am just curious, what kind of image transfer or paper are you using for the mugs. I would love to try something similar.

The paper we use is called Unical paper.
Hope this information helps!