On Paper: Grand Central at 100


Earlier this year Rob was invited to participate in an exhibition featuring the work of four contemporary papercut artists as part of Grand Central Station’s Centennial celebrations in New York City. The exhibition was commissioned and curated by MTA Arts for Transit and Urban Design, and will be on view from September 27th 2013 through to September 2014. 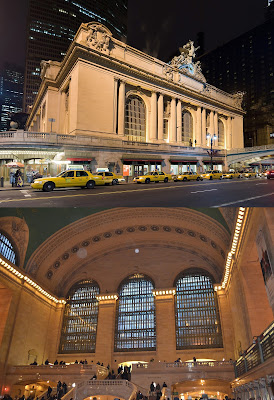 The central terminal marks its 100th birthday with a year-long celebration of events and exhibitions. Rob has produced four large papercuts, which will be installed side by side in light boxes located on the dining concourse on the lower level of Grand Central Terminal. 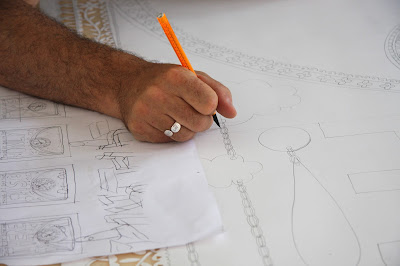 It was all hands on deck here in the studio to cut the pieces Rob had drawn for the exhibition. The papercuts, when placed alongside each other, read ‘There Is Only Time!’


When working on Rob's papercuts we start by cutting out the smallest part first, this allows for the papercut to stay fairly sturdy for as long as possible. In this case, we cut out all of the tiny hearts from the border. 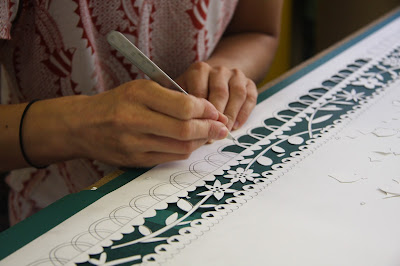 Once the borders had been cut we begun working on the larger areas and the big letters. We used a special tool called a Japanese drill punch to make the holes in all of the clouds. 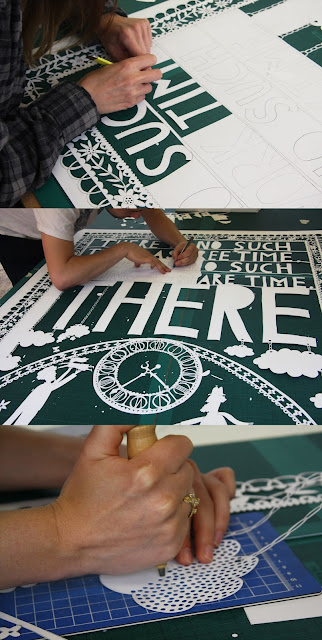 When the pieces had been cut they were ready to be sprayed, because of their lightbox setting we coloured them black. We did this outside in our yard by carefully fixing each papercut to a piece of mount board with pins so it didn't blow away. 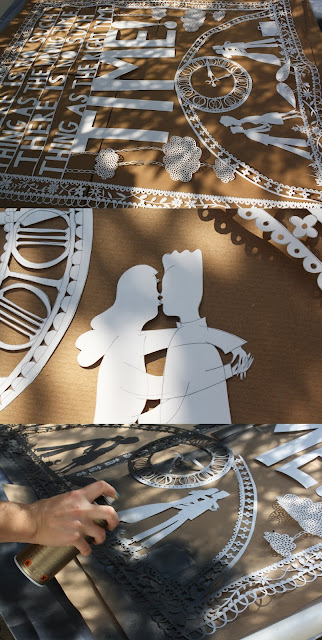 Rob said of the work, ‘In making this piece of work I wanted to connect quite directly with the people that use the station. I wanted to speak clearly and directly to these busy, tired and hard working people that are always on the move, that are constantly rushing through this building, catching trains, trying to make it on time. I wanted people to be able to stop and look at something that might help them take a deep breath and exhale and relax and somehow feel everything was going to be ok. The poet Philip Larkin said it a thousand times better than I could when he asked the question ‘Where can we live but days?’.  If somebody can sit down and take the weight off their feet, look at my four pictures and it gives them some kind of solace, if only for a few moments then that would be good.’ 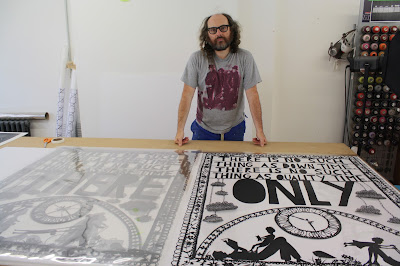 I will write another post next week with images of the final pieces and a behind the scenes look at the installation of the work at the station. For more information regarding the exhibition and the work on display you can visit the Arts for Transit twitter page here, or their facebook page to find out more! 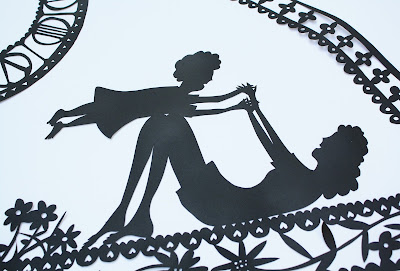 Louise Renforth
Studio Assistant
Posted by Rob Ryan at 6:22 AM

i was eating right under this art the other day and googled it to find out more, i am amazed! these works blew me away!

Thank you for your art!

I am sure this post has touched all the internet viewers, its really really nice piece of writing on building up new blog.

Thats a good' article, i usually amazed with' this thing, i asked myself about this opinion, I wish You'll a better articles that can make another people live..don't make the article feel rigit and isn't interesting and poor, i like to read this' article and i think this is "good".thank you' m'y brother...........

I was about to say something on this topic. But now i can see that everything on this topic is very amazing and mind blowing, so i have nothing to say here. I am just going through all the topics and being appreciated. Thanks for sharing.

I know where I'm going and I know the truth, and I don't have to be what you want me to be. I'm free to be what I want.Thankyou i really love it

Hello, i'm Toko Glucoberry !! Thank you very much for sharing this information that very very helpful and very useful Manfaat Coklat untuk Kecantikan Kulit Obat Kardiomegali
I feel strongly about it and love learning more on this topic. If possible, as you gain expertise, would you mind updating your blog with more information?
Cara Menyembuhkan Kardiomiopati Cara Menurunkan Berat Badan

Thanks for Sharing That... Sucses for You

Thanks for Sharing That... Sucses for You

Love the article about this review. Truly genuine and simply the best. I can’t describe it in words. You are way ahead in blogging. Keep sharing such a nice things. Thanks.

I know this is not fair. I know this has happened
Do you want to say I can't. Your tears no longer want to drip

We find lots of learning after reading this very useful article .