There Is Only Time: Sims Reed Gallery 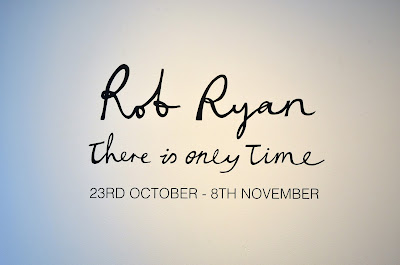 Rob's solo show There Is Only Time is at Sims Reed Gallery from now until 8th November 2013. It is open Monday - Friday  10am - 6pm and Saturday 11am - 3pm. The exhibition showcases an entire new body of papercut work and limited edition screenprints. 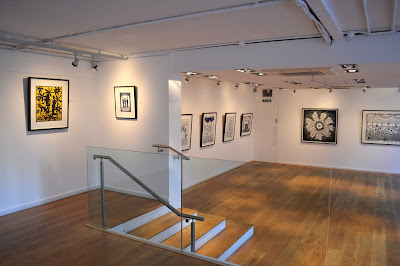 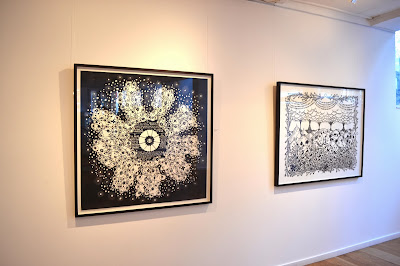 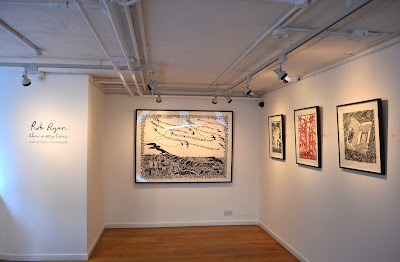 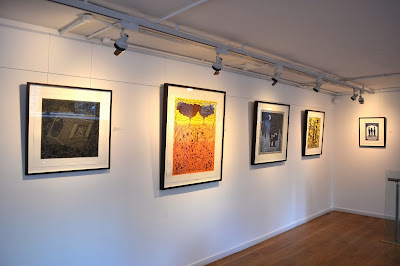 Rob has also produced a new Ryantown SPQR newspaper especially for the exhibition, it shows in detail a behind-the-scenes look at the work being made. You can collect your copy from the gallery or via our etsy store here. 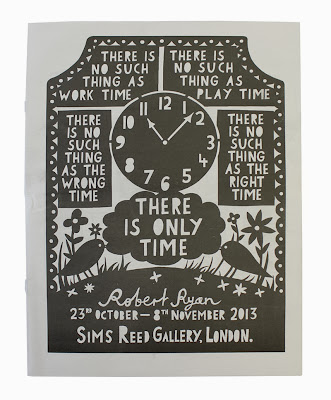 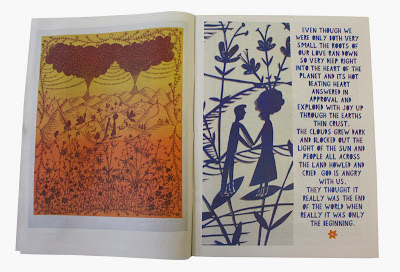 The exhibition coincides with the launch of Rob's new book The Invisible Kingdom, which forms the first part in a trilogy. To celebrate the launch, Sims Reed Gallery will be hosting a book signing with Rob this Saturday from 1-2pm. The gallery address is, 30 Bury Street, London, SW1Y 6AU.  We hope you can make it to the show! 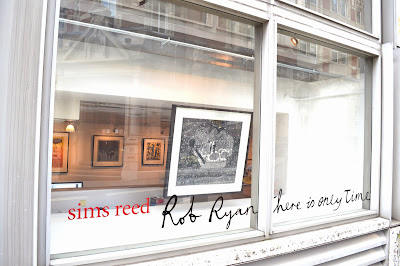 Rob's new book, 'The Invisible Kingdom' is published this week on the 24th October 2013.  It forms the first part in a trilogy telling the story of 'a small boy, a big imagination and learning to be your own person.'

With the publication date drawing close I thought it would be a good time to share a glimpse at some behind the scene stages involved in the making of it here at Ryantown HQ. 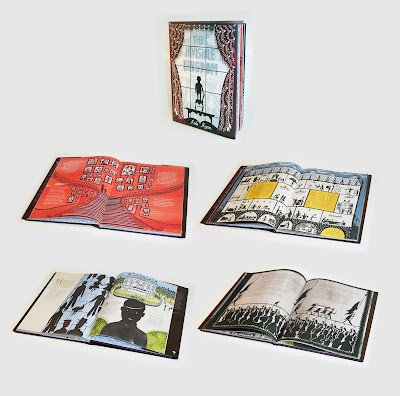 Early in the year, Rob started planning the story and mapping out his ideas, starting with post-its, then onto long pages of notes which covered the walls of the studio. 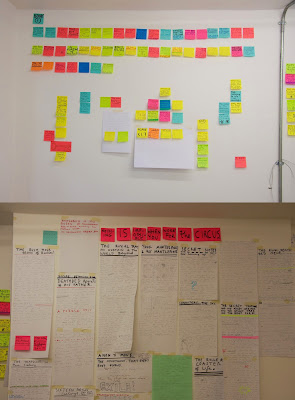 Once happy with the plot he began to illustrate his words. Rob's drawings were scanned and laid out on the computer by his studio assistant Libby, who did an amazing job in helping bring the story to life. 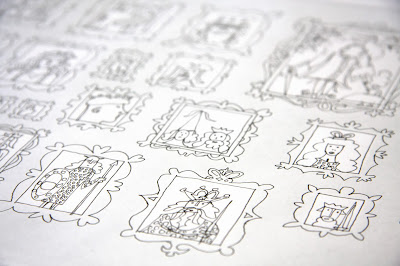 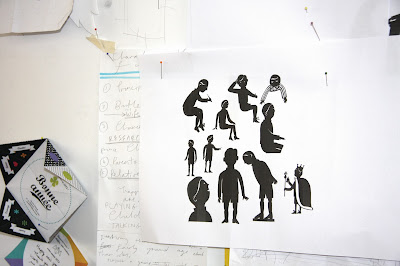 The upstairs wall of Ryantown was transformed as the pages of the book began to take shape with colour and texture. Rob was clearly able to see each page and make any changes as he went along. 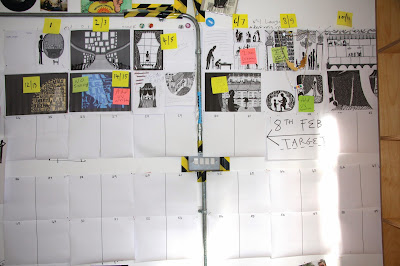 'The Invisible Kingdom' will be available to buy from 24th October 2013 and Rob will be signing copies at Sims Reed Gallery on October 26th from 1-2pm. Here is a brilliant video where Rob discusses the book and his thoughts behind the making of it. 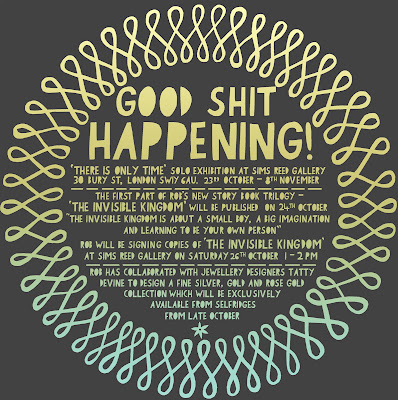 There are some exciting events coming up on the Ryantown calendar this month! Rob is showing a collection of new work, There Is Only Time, at Sim's Reed Gallery, in London, it opens next Wednesday, 23rd October and runs until 8th November 2013. The gallery is open on both Saturday 26th October and Saturday 2nd November 11 am - 3pm for those of you traveling from outside of London or unable to make it during the week.

Rob's new book 'The Invisible Kingdom' will be published on the 24th October, and Rob will be signing copies of the book at Sim's Reed Gallery on October 26th from 1-2pm.  I will be posting a blog very soon with more details and images of the making of the book and some of the stages involved in bringing the story to life.

Rob has also collaborated with Jewellery Designers Tatty Devine,
to produce a collection of fine jewellery which is exclusively available at Selfridges from 20th October!

Last year Rob was commissioned by the Victoria & Albert Museum to design their membership card and pack, here is the original papercut which Rob created for the front. 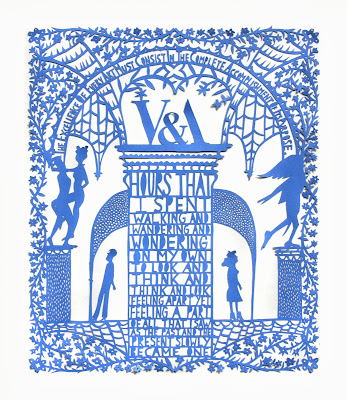 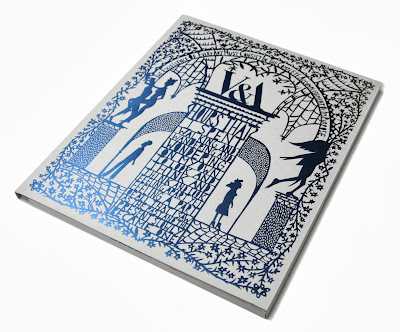 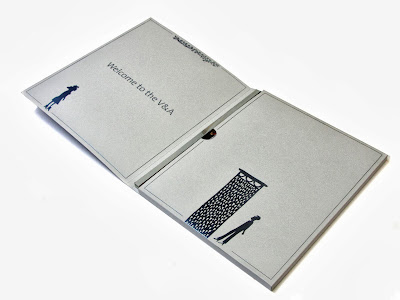 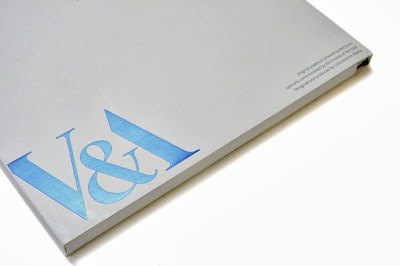 The V&A have also invited Rob to discuss his career as an Artist as part of their membership programme of events. 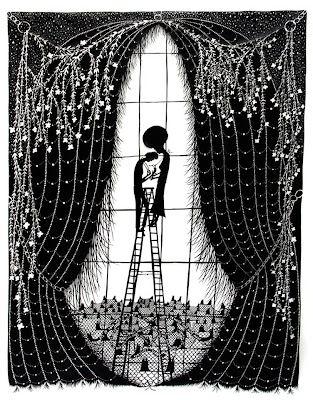 If you are a member you can find tickets available here,  however non-members are also welcome and can buy their tickets here!