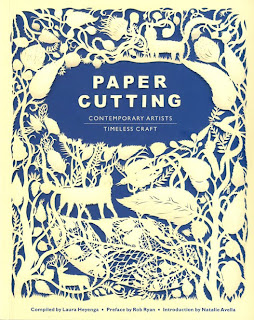 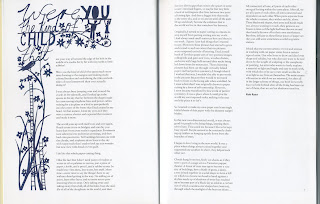 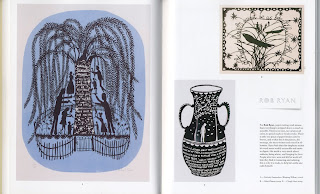 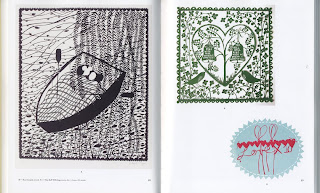 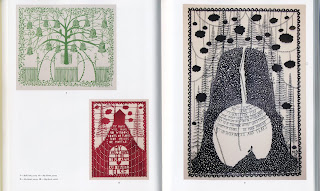 Chronicle books have just released a new book entitled 'Paper cutting' and I was honored to be asked to write a preface. The book is filled with beautiful photographs of paper cutting artist's work such as Su Blackwell, Nikki McClure and Peter Callesen (there's a bit of mine in there too!) You can read my preface below as it might be too small to read in the pictures!!

Were you the kind of child that ate your way all around the edge of the hole in the middle of a biscuit bit by bit with tiny teeth in little nibbles?
Were you the kind of child who spent much more time drawing margins and making multi-colored borders and underlining the titles and subtitles of your homework than ever actually doing it?
I was always busy jumping over and around the cracks in the sidewalk, and I looked up at the spaces in the sky that lay between the shapes made by crisscrossing telephone lines and power cables waiting for a jet plane or a bird to pass perfectly into the centre of the frame that I had created in my head. At that instant, I shut my eyes as if they were a camera shutter and captured that moment and made it mine.


The world joins up with itself over and over again. Roads cross rivers on bridges; and one day you learn that rivers cross roads in aqueducts. Pavements turn sideways into pedestrian crossings, and then back into pavements again. Tall buildings become one with the clouds, and airplanes draw lines in the sky with vapor trails that I used to look up at in wonder but now with dread or even guilt.

I do like this whole paper-cutting thing.
I like the fact that I don’t need paint or brushes or water or oil or palettes or canvas, just a piece of paper, a knife, and a pencil [and a rubber (eraser)!]. So much less—less mess, less waste, less stuff. More time—more time to say the things I have to say without detail getting in the way. No adding on of paint, layer after layer—no more never quite knowing when to stop. Only taking away and taking away, first of all, all of the holes from the middle of all of the doughnuts in the world, and then the tiny slivery gaps that exist in the spaces in some lovers’ entwined fingers, or maybe that tiny little island of nothingness that lives between two pairs of kissing lips. And then a bigger hole that really is the entire sky, and so on and on until all the gaps fill up and slowly become the solidness that is the world we live in that somehow lies between.

Originally I turned to paper cutting as a means to stop myself from putting writing into my work. I had always used small sentences here and there in my work. ( I guess I just had things that I wanted to say.) However these phrases had started to grow and extend to such an extent that my pictures were composed entirely of lettering. I had a small book of Tyrolean paper cuts, of very pastoral images, rolling hills and gates and trees, wooden chalets, and cows with huge bells around their necks being led down from the mountains. These charming pictures had been cut through vertically folded paper and as such had perfect symmetry; I thought that if I worked that way, I wouldn’t be able to put words in the pictures because they would be mirrored back to front on the facing side when unfolded—so I must admit I was originally drawn to paper cutting by a form of self-censorship. However, I soon became transfixed by this world of perfect symmetry. It was a place where I could give the world my own imposed order, making it the neat and tidy place it so isn’t.

So I started to make my own paper cuts from single folded sheets of thin paper with the sharpest scalpel blades.
In this new two-dimensional world, it was always good for people to be doing things, keeping themselves busy. This suited me because I like to be kept busy myself. People seemed to be constantly climbing up ladders or hanging upside down from the branches of trees.

I began to love living in the new world. It was a place where things always joined together and supported one another—in short, they helped each other out.

Clouds hung from tiny, finely cut chains as if they were a part of a stage set in a Victorian puppet theater. A forest of trees rose up to become a vast city of buildings, here a blade of grass, a daisy, a tree joined together in a solid shape to form a hill on which two lovers ran hand in hand against a skyline made up of shadows of trees that reach up to become part of a black sky as solid as a curtain out of which countless star shapes have been cut, through which the starlight of the heavens shines . . . all connected, all one, all parts of each other on equal footing within the same plane. After all, we are all a part of each other. When parts separate from the whole in nature, they wither and die, alone. These blackened shapes, their arms and hands reach out, always wanting to touch, their gestures are frozen in time as if the light had been thrown on and then hastily thrown off to their own startlement. But then, delicate as these flimsy pieces of paper are, they can still seem sometimes as solid as granite statues.

I think that the current artistic revival and interest in working with cut paper stems from a certain type of artist. One who loves to draw and also loves shape and solidity, but who does not want to be tied down by the weight of sculpting or the complexity of painting. An artist who wants to freely explore a material so light and fragile and easy to work with, with which she or he can create small worlds for us as light as our lives are themselves. The artist creates silhouettes in which we are mirrored, for after all in the larger scheme of things, our brief lives really leave so little behind after all the living has been cut out of them, that we are but shadows ourselves.
Posted by Rob Ryan at 3:58 AM 14 comments: Please click here to be directed
Posted by Rob Ryan at 10:00 AM 3 comments: 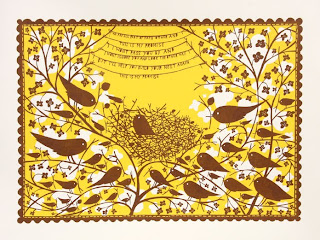 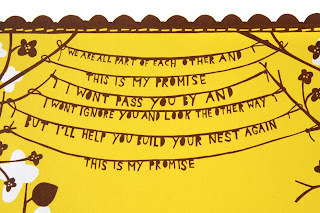 As you all know, just over a year ago on 12th January 2010 Haiti was hit by a catastrophic earthquake and 13 months later, the country is still in need of so much help. To try and do my bit to raise some money, I’ve designed and printed a brand new limited edition screenprint which will be sold on Etsy and in my shop, Ryantown on Columbia Road. The price will be £200 and with Paypal and Etsy fees from the online sales subtracted, this leaves at least £186 going straight to the Haiti cause per print sold. If we can sell the whole edition of 200 of these, we could raise over £37,000.
The print reads: ‘We are all part of each other and this is my promise, I won’t pass you by and I won’t ignore you and look the other way but I’ll help you build your nest again. This is my promise’

Prints will be available to buy from Etsy on Friday and Ryantown on Saturday.

If you would like to re-post this blog entry to your own blog or website, please feel free, I want to make as many people aware to raise as much as we can.
Posted by Rob Ryan at 7:48 AM 10 comments: 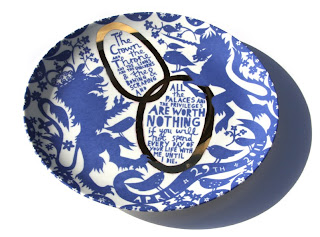 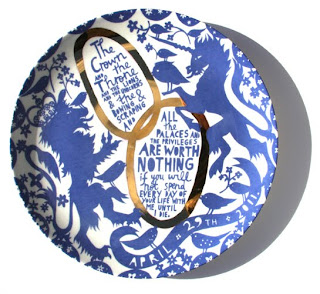 I have just designed and made this Royal blue and gold one-off plate for English magazine, Living Etc to celebrate the Royal Wedding of Prince William and Kate Middleton in April. The gold is painted on by hand and the text reads 'The Crown and the Throne and the lions and the unicorns & the bowing & scraping and all the Palaces and the privileges are worth nothing if you will not spend every day of your life with me until I die.'
Posted by Rob Ryan at 9:59 AM 13 comments: 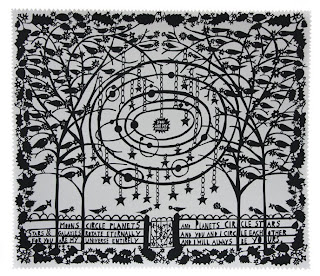 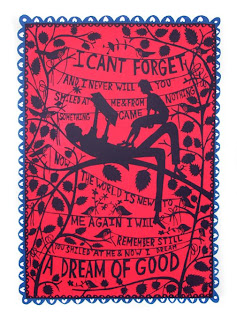 Two new colour-ways of 'I Can't Forget' and 'You Are My Universe' have just been printed and are available on etsy now and will be in Ryantown this weekend!!!
Posted by Rob Ryan at 2:15 AM 5 comments: