A Place to Work and Dream: The Chelsea Flower Show 2013 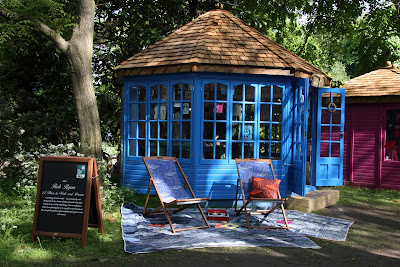 Last month, the RHS Chelsea Flower show celebrated its centenary year and for the second year running the Artisan Retreats invited well-known artists and designers to decorate the summer houses, showcasing their work and transforming the space to reflect their own unique style. With last years artists including Orla Kiely, Kaffe Fassett and Nikki Tibbles we were honoured to be invited to take part this year alongside Cath Kidston, Wayne Hemingway and Pippa Small.

The summerhouses, donated by The Malvern Collection, were introduced last year as part of the redevelopment of the Plateau as a place for relaxation and refreshment, where visitors to the show can escape the busy crowds of the main show-ground and hopefully be encouraged to transform their own outdoor buildings and spaces. 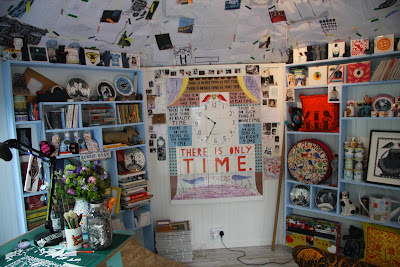 Rob decided to use the space to re-create his own studio, a sanctuary for creativity at the bottom of the garden. He describes his retreat:

'Here is a gentle, sleepy place where I pick up loose ends once more and tie them onto something new, where I come to think and dream and write and draw. My thoughts and ideas cover the surface of every wall in here, because the inside of this summerhouse is really an entire country of its own and that country is called…The Inside Of My Brain. Surrounded by and immersed in the clutter of these beloved books and records and scribbles and things I know and love is where I am finally free to be myself. In my domain at the end of the garden, I feel confident enough to create and create.' 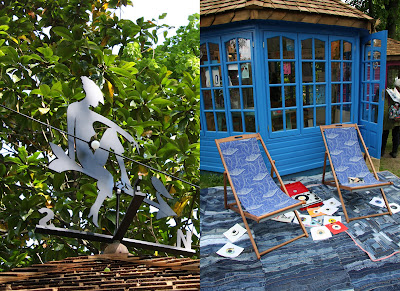 The Ryantown team enjoyed decorating the space with all of our beloved things from the studio, with Rob's drawings covering every surface. Rob created a number of unique pieces especially for the retreat, including a conversation seat, weather vane, deck chairs and tiled wall clock. 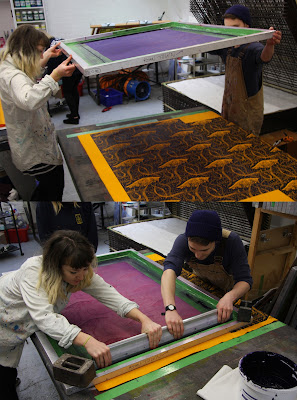 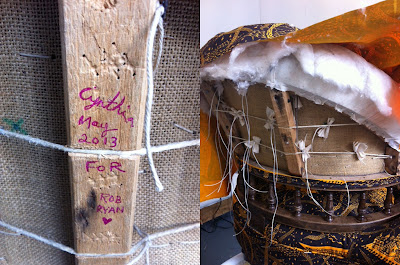 The conversation seat had previously been living in our print studio and the show gave us the perfect opportunity to bring it to life again! Our screen printers, Jackie and Tom, printed the repeat pattern on to a length fabric before handing it over to our shop manager, Cynthia, who did a great job re-upholstering the seat.

To make the wall clock, Rob’s drawings were screen printed in sections; once the image is printed we use a special cover coat over the image to create the transfer decal ready to be placed on each individual tile. This process is quite lengthy as different parts of the design over lap and require a number of firings in our studio kiln. For anyone who didn't get a chance to see the wall clock in the flesh, it is now on permanent display behind the counter at our shop on Columbia road.

In our retreat we gave out our own seed booklets, which included a packet of wildflower seeds, (I will be writing a post about the seed booklets later in the week) and for those of you who took one away, I hope you have fun planting them. We planted some of the seeds here at the studio and I can't wait to see what blossoms later in the year. 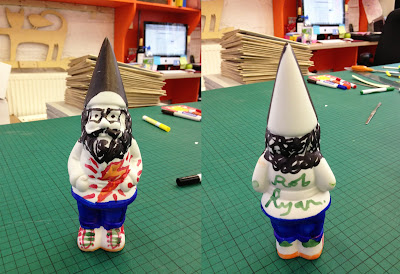 As part of the centenary celebrations, the Chelsea Centenary Appeal was launched and designers and celebrities were asked to paint their own garden gnome to be auctioned to raise money for the RHS for Schools Gardening. Rob painted his gnome complete with Ray Ban glasses and lightning bolt jumper! This was particularly special as gnomes are usually banned at Chelsea, so I hope they raise a lot of money for a good cause. 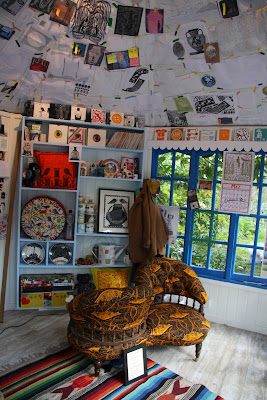 Rob reflects on the show, ‘I must admit I was a little concerned about how our presence would be received at Chelsea, I mean the studio has little or nothing to do with flowers or gardening at all! But I was completely bowled over by how positive peoples reactions were, people who have never seen my work before came in and asked questions all about it. The great thing was it was people from all over the country, from every social demographic, I’m really glad we did it.’

Everyone at Ryantown enjoyed being involved in such a great event and talking to all the visitors to our retreat!

Louise Renforth
Studio Assistant
Posted by Rob Ryan at 5:06 AM

This is such a lovely lovely post!!!! I am so sad i live so faraway, i would have loved to pop in! Rob's little space looks so so beautiful! thanks so much for sharing!!xxxx