Rob recently finished a new edition of plates. The words read ‘Even though I know we dreamed the same dreams I still wish that we’d known each other as children’

Making the plates is a lengthy but rewarding process involving many colour sampling and firings in our studio kiln. You can see from the photo below some of the different colour combinations we tested before making the final decision. The colour sampling stage is exciting in itself as often colours change after they have been fired and something magical can happen! 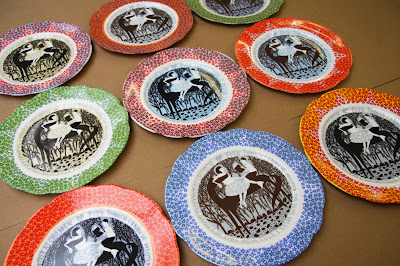 It is also necessary at this early stage, to check all of Rob's work for any spelling mistakes. Often, Rob's drawings will include a lot of words so it is important to make any changes now before starting to work on the edition. During the making of this particular plate, we noticed a spelling mistake in the initial stages and were able to correct it. 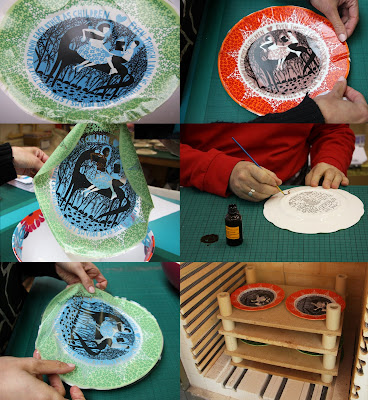 Similar in process to the tile wall clock, Rob’s drawing is screen printed with ceramic ink then a cover coat, this creates a decal transfer for the plate. The decal is then delicately placed on to each plate by hand, taking care to smooth out any creases or bubbles which may appear in the image. It is important to make sure the image lies smoothly on the plate because any bubbles increase the chance of the decal becoming damaged when it is being fired at such a hot temperature in the kiln. I really like this stage in the process, as this is when Rob’s drawing and the ceramic come together to create a final piece. We place the words on the back of the plate in the same way, with both the front and back being fired at the same time. However, there is a separate and final firing in our kiln once Rob has initialled the back of the plate in gold lustre, the reason for this is the lustre has to be fired at a lower temperature. 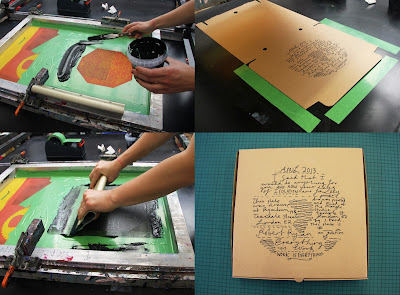 Jackie screen printed some great presentation boxes for the plates to be sent in. The back of the plate and front of the box reads  ‘April 2013. I said that I would do anything for you and NOW your days of ISOLATION are finally over. This plate was drawn at Ryantown HQ Teesdale Street London E2. And was printed and fired at the Mangle studio Temple St London E2 by J.Ford. This plate is # in an edition of #. Robert Ryan. Everything is work. Work is everything.’

The final colour choices, shown above, were green and blue for one edition and orange and grey for another. Each colour comes in an edition of 20 and is signed by Rob and numbered in gold lustre on the back.

I hope the images shown here give a clear picture of the stages involved in producing the plates. Rob is currently working on some new plate editions so keep an eye on the blog for more updates about them soon.

Louise Renforth
Studio Assistant
Posted by Rob Ryan at 8:47 AM

So so beautiful! Will these be available to purchase from your beautiful etsy shop soon?!xxxx